J has been seeing me for reflexology for the past 12 weeks. He came because of debilitating pain caused by a whiplash injury 12 months ago. The conventional approach – physiotherapy etc – had not helped at all; massage would give relief for three days; might as well give reflexology a try!

J had constant pain down the back of his neck into the shoulder; bulging discs between each vertebra from C3 to C6, daily headaches building from 2/10 on waking to 9/10 in the evening; he could only turn his head 30% to the right, making driving a tad dangerous at times. He was taking Stilnox to sleep at night.

I won’t go into a detailed account of each session or his reactions, although these have been interesting to say the least – after the first treatment (8am) he went straight home, cancelled all his business appointments and slept until 1pm! 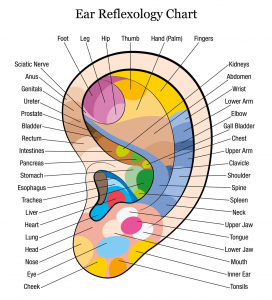 Each session involved 35 minutes of auriculartherapy followed by 20 minutes of foot and hand reflexology of mainly the muscular-skeletal system reflexes. After 10 treatments J has practically no headaches even after work, can turn his head 50%, and is sleeping without medication. Progress has been very gradual with a few setbacks – it is therefore important to never give up too soon.

It is important also to be up front about what reflexology can and can’t do, I find. As far as a whiplash injury goes, reflexology can relax the spasming muscles and reduce the associated inflammation. It will also reduce the build-up of tension in the nervous system and help with much needed sleep. J didn’t have any other symptoms so I focused on talking about the above.

After 5 sessions I suggested that in addition to reflexology, he have Cranio-Sacral therapy, also excellent for neck injuries. He responded really well to that treatment – and it triggered a memory that he had fallen badly on his neck as a school boy but been made to promise not to tell anyone by a teacher, so it was never treated! Imagine the emotional trauma caught up in his neck.

In a case like this, once the muscles relax, there will be less pressure on the vertebrae and the nerves. Less pressure, less inflammation = less pain. However, the muscles have spent a whole year learning a new way to be. Thus, any strong activity eg: lifting or long drives will send them straight back into stress mode.

After 4 months of regular auriculartherapy treatments combined with foot reflexology, J is free of pain, has good neck movement to both sides and can lead an active physical life again.

Early last year whilst on holidays I was asked to treat a 28 year old male for alcoholism. The request was made by the parents who had tried many different approaches to help their son, all to no avail, and out of sheer desperation asked if I would try auricular-therapy for him.

I treated him after his father had just collected him from a drinking binge. He was brought in reeking of alcohol and agreeable to having the treatment. Not long after having completed the training in auricular-therapy but full of faith and enthusiasm, I followed the treatment protocol for alcoholism as set out in Dr Terry Oleson’s manual. Using a probe, I worked his right ear and placed magnets on the most reactive points including Alcoholic Point, Liver, Lung 2, Tranquilizer Point and Shen Men.

Throughout the treatment he gave very little reaction except to indicate which points felt most painful and uncomfortable. He left without saying much and at this stage I was just pleased to be asked to help with this long standing problem.

Not giving it much thought, I was surprised to receive an email from the parents a couple of months later advising me that their son had abstained from alcohol since the treatment and was displaying positive signs with respect to getting his life back in order. He had moved back home, appeared more confident, was exploring ways to expand his work and was taking more interest in personal hygiene and grooming. Things that had long been neglected.

It has now been about 22 months and the reports are still favourable. Apart from a few minor episodes, he has remained well and his parents continue to sing the praises of auricular-therapy. Of the numerous different therapies and approaches their son had tried over the years, nothing had produced the positive results like auricular-therapy.

My experience with 3 clients has been most encouraging. In each case medication could be reduced significantly using auriculartherapy as the main treatment form backed up with a relaxing 20-30 minute foot reflexology session. Auriculartherapy benefits people with TN as it can reduce the facial pain specifically by applying pressure to the ear points relating to the particular area of pain eg: jaw or forehead, as well as to points that relate to the trigeminal nerve. Master points that are helpful for pain relief are also.

have been seeing this client now for 2 1/2 years and the sessions are less regular as the pain is well managed. We had a further improvement when I began to use Cranio-Sacral reflexology on her feet. She can now touch any part of her face without it causing pain. When she can’t see me for an extended period, she self-treats using a 800gauss magnet on the trigeminal point on the ear lobe.

This client differs from the other two in that she has multiple sclerosis. Her attacks of trigeminal neuralgia have been sporadic but have had the same symptoms – sharp, shooting facial pain on eating, touching the face etc. Fortunately however, the pain has disappeared entirely each time after 1 or 2 treatments.